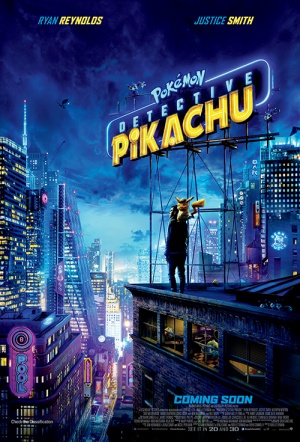 A young man teams up with Detective Pikachu (voiced by Ryan Reynolds) to find his missing father in this live action family adventure co-written and directed by Rob Letterman (Goosebumps).

When ace detective Harry Goodman goes mysteriously missing, his 21-year-old son Tim (Justice Smith, Jurassic World: Fallen Kingdom) sets out to find out what happened. Aiding in the investigation is Harry’s wise-cracking former Pokémon partner, Detective Pikachu. Uniquely able to communicate with one another, Tim and Pikachu join forces on an adventure to unravel the mystery. Chasing clues together through the neon-lit streets of Ryme City — a sprawling, modern metropolis where humans and Pokémon live side by side — they encounter a diverse cast of Pokémon characters and uncover a plot that could destroy this peaceful co-existence and threaten the Pokémon universe.

From the Game Boy RPGs and the viciously popular '90s cartoon to the Pokémon GO app that made zombies of us all, Pokémon has never stopped being relevant. It's surprising that a live-action movie has taken this long to arrive. It's even more surprising they adapted an obscure 3DS spinoff title rather than one from the core adventure series. The most surprising thing, though? Detective Pikachu is a videogame movie that doesn't suck.

The world's smallest and most yellow investigator helps Tim (Justice Smith) search for his father in this blockbuster Pokémon spin-off. Unfortunately Detective Pikachu is ho-hum and ham-handed.

Its box office should demonstrate fans' hunger for a more robust big-screen version of the Pokémon universe, while the disappointment needn't dissuade another team from coming along and doing it right.

Reynolds and Pikachu make an inspired combo in a CGI/live-action mash-up that otherwise adheres to a rigidly boilerplate formula.

Fortunately, the ever-likeable Reynolds is equal to the task, channelling the savvy exuberance (but not the rude bits) of his Deadpool persona.

The inspired casting of the Deadpool actor transforms this from an average Pokémon movie into fun family fare.

However, while it doesn't quite reach either the nostalgia or quality heights of this past summer's Bumblebee (currently Mr Eight's No. 1 movie), this is finally a Pokemon movie worth catching while seated alongside your kids.

Much like its title character - an adorable little fuzzy yellow whatsit bearing the smart-aleck voice of Ryan Reynolds - "Pokemon Detective Pikachu" is an odd creation powered by contradictory impulses.

Pokemon Detective Pikachu plays it smart by honouring the decades of lore that have made the critter-catching video game and cartoon series so beloved, while also ignoring all that to create its own unique story.

Still, there's enough here to please both Pokemaniacs and the Poke-non.

It's impossible to overstate how much this film owes to Ryan Reynolds. Even if you don't understand Pikachu's world, everyone can understand a great joke superbly delivered.