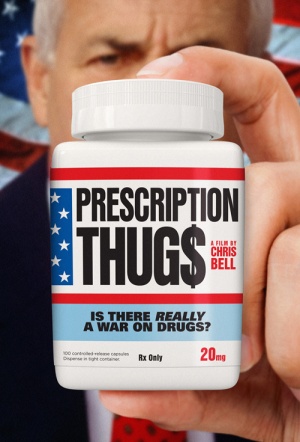 After losing his own brother to the growing epidemic of prescription drug abuse, documentarian Chris Bell (Bigger Stronger Faster) sets out to demystify this insidious addiction and expose the legal drug business.

"Bell’s examination into the motives of big pharma and doctors in this ever-growing market leads him to meet with experts on the nature of addiction, survivors with first-hand accounts of their struggle, and whistleblowers who testify to the dollar-driven aims of pharmaceutical corporations. Ultimately his investigation will point back to where it all began: his own front door.

"Bell follows up his rousing Bigger Stronger Faster, which pulled back the curtain on steroid use in the U.S., with a galvanizing exposé... While the war rages against illegal drug use, Bell attempts to break the hardened correlation that legal means safe." (Tribeca Film Festival)

Engaging and enraging but also, alas, consistently superficial, it's a hot-button work whose easily digested nonfiction methods will appeal to mainstream documentary audiences, even if they also leave viewers hungry for greater substance.

Even before a "do as I say, not as I do" twist costs it all credibility, Prescription Thugs is a not very good documentary about a very important subject.

Despite his casual aura, the filmmaker is eloquent and thoughtful.

An accessible look at an important topic: the medicine that ails us.