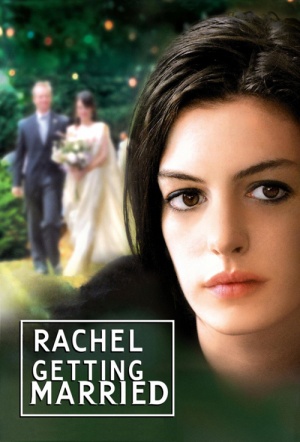 As you’d expect, this independently produced drama, directed by Jonathan Demme (Silence Of The Lambs/Philadelphia), features a woman called Rachel (Rosemarie DeWitt). And indeed she’s getting married – to a guy called Sidney (played by the singer of band TV On The Radio, Tunde Adebimpe). But the film centres on her troubled sister Kym (Anne Hathaway), who returns from rehab on the eve of the nuptials, resurrecting all sorts of angsty familial demons.

Written by Jenny Lumet (daughter of directing legend Sidney), this is shot in a naturalistic documentary style and has been highly praised for its deep emotional kick, garnering a Best Actress Golden Globe and Oscar nomination for Hathaway.

Brimming with energy, elan and the unpredictability of his "Something Wild," Jonathan Demme's triumphant Rachel Getting Married may just lay the wedding film to rest, being such a hard act to follow.

It’s a small movie, and in some ways a very sad one, but it has an undeniable and authentic vitality, an exuberance of spirit, that feels welcome and rare.

It’s a small movie, and in some ways a very sad one, but it has an undeniable and authentic vitality, an exuberance of spirit, that feels welcome and rare.

A friend asked: "Wouldn't you love to attend a wedding like that?" In a way, I felt I had. Yes, I began to feel absorbed in the experience. A few movies can do that, can slip you out of your mind and into theirs.

Full to the brim with the delightful, dysfunctional anarchy that only family can provide. It’s certainly worth a gander, and not just for Hathaway.

A film whose lightness of touch rides a wave of family conflict to perfectly balance smiles and tears.

A triumph -- Demme's finest work since "The Silence of the Lambs," and a movie that tingles with life.

One of Hollywood’s forgotten masters and one of its brightest new actresses team for what could well be an Oscar wild card.