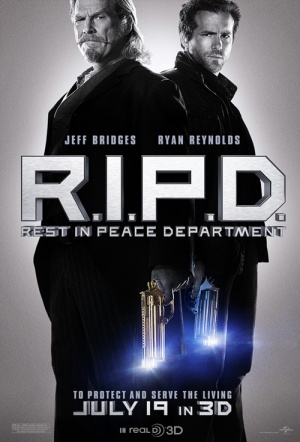 A veteran of the force, sheriff Roy Pulsifer (Bridges) is tasked with bringing in monstrous spirits trying to escape final judgement by hiding amongst the unsuspecting living on Earth. Once the wise-cracking Roy is assigned former rising-star detective Nick Walker (Reynolds) as his junior officer, the new partners have to turn grudging respect into teamwork. After they uncover a plot that would see the tunnel to the afterlife begin sending angry souls the wrong way, this pair of R.I.P.D's finest must restore the cosmic balance.

Benefits from a hilariously free-associative performance by Jeff Bridges.

All bow too slavishly to the stale popcorn of yore; how about starting with a killer script instead?

Mr. Bridges is almost always fun to watch, but even his squinting and Slim Pickens-style whooping can't make the time pass faster.

Begins from a place of endless possibilities and imagination, then follows the breadcrumbs of formula to a wholly generic end.

As a major undertaking with clear sequel ambitions, there's just not enough new and exciting here to cut it.