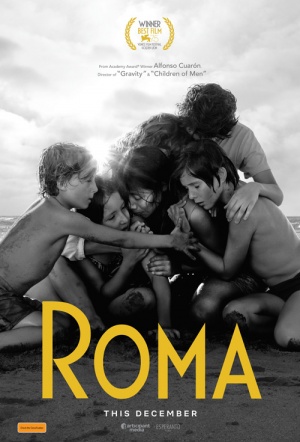 Semi-autobiographical drama from Gravity director Alfonso Cuarón chronicling a year in the life of a middle-class family in '70s Roma, Mexico City. Best Film winner at Venice Film Festival 2018 and holds both Golden Globes and Oscars for Best Director and Best Foreign-Language Film.

Cleo (Yalitza Aparicio) works for Sofia (Marina de Tavira), a mother of four coping with the absence of her husband. Cleo loves Sofia’s children as her own, but troubling news threatens to relinquish her employment. While the country faces political upheaval, Cleo and Sofia quietly wrestle with changes infiltrating the family home.

Roma is no mere movie — it’s a vision, a memory play that unfolds with a gritty and virtuosic time-machine austerity.

So full of dazzlingly intricate visual poetry, so teeming with sensory spirit, that trying to review it is a bit like trying to review all of life. Which may sound a bit grandiose, but Cuarón's magnum opus provokes such turgid sentiment.

A richly textured masterpiece, Roma is cinema at its purest and most human.

Too often Roma feels dramatically insipid (the family is actually profoundly boring) and unsure of what it's trying to say about Cleo's life and her status - if it's saying anything at all.

Every individual scene feels filled with the lucid detail of a formative recollection or a recurring dream.

In its engagingly episodic way, it is also at times like a soap opera or telenovela. And at other times it feels resoundingly like an epic.

The term "masterpiece" gets chucked around far too loosely, and I mostly try to avoid it. But once in a lucky blue moon, there really are no other words to do a film justice.