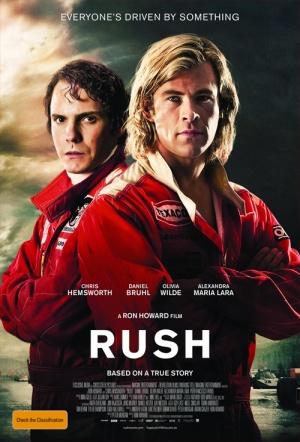 Director Ron Howard (Apollo 13) explores the ego-driven, high-risk/high-reward world of 1970s Formula One racing in this true story chronicling the rivalry between Niki Lauda and James Hunt. Daniel Brühl (Inglourious Basterds) is the clinical Austrian Lauda, while Chris Hemsworth (Thor) is British playboy Hunt. Co-stars Olivia Wilde and Natalie Dormer, from the writer of The Queen and Frost/Nixon.

While Lauda may have become Formula One World Champion by a massive margin in 1975, the following year saw a fierce competition commence between the defending champ and Hunt from the very first Grand Prix. Over the course of 1976, every race would see the pair scrap it out on and off the track, and even a horrific, theoretically unsurvivable crash proved no match for their rivalry. The two men were locked in a struggle to reach the pinnacle of motor racing during one of its most glamorous eras.

Ron Howard’s Rush is an exuberant, diverting dramatisation of the legendary rivalry between Formula One racers James Hunt (Chris Hemsworth) and Niki Lauda (Daniel Brühl) over the course of the fateful Grand Prix season of 1976. Its combo of hair-raising behind-the-wheel action, heated off-track controversies and stormy relationship soap is hardly earth-shattering stuff, but Howard and writer Peter Morgan (Frost/Nixon) do squeeze sufficient dramatic tension out of the opponents’ wildly different temperaments, while acknowledging their shared sense of purpose and conviction.

Not just one of the great racing movies of all time, but a virtuoso feat of filmmaking in its own right, elevated by two of the year’s most compelling performances.

What Rush has to offer is a great human drama, two dangerously talented men pushing each other to risky victory and a superb script, delivered with some mastery by Hemsworth and Brühl.

Comes mightily prepackaged, with pat, telling romantic arcs for both protagonists, and a summarizing conversation where they reveal what they’ve learned... still a tremendous thrill-ride.

It rarely deviates from formula, but Rush wins big, delivering the most exciting F1 footage created for film.