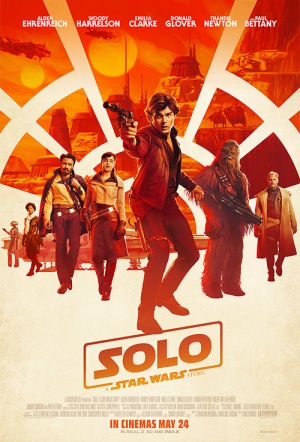 Phil Lord and Christopher Miller, directors of The LEGO Movie, originally helmed the film. However, partway through shooting, the pair was taken off the film due to creative differences. The project was then given to Oscar-winning director Ron Howard.

You can feel the two versions of Solo: A Star Wars Story tugging at each other throughout.

Though burdened with a slow start and enough thirsty fan-service to power Comic-Con's Hall H for a decade, it has a kicky, kinetic heist movie at its heart, and its action sequences are machine-tooled spectacles of the first order.

Far better than we had any right to expect. Thrilling set-pieces, spine-tingling iconography and a Han/Chewie bromance to savour.

It doesn't take itself too seriously, but it also holds whatever irreverent, anarchic impulses it might possess in careful check.

With [Ron] Howard at the controls, the movie is a fun-fuelled entertainment.

Delivers exactly what it promises. It is a very competent and, at times, riotously enjoyable film.

Howard and the Kasdans play the series game without ever raising the stakes, defaulting to dull and dutiful when they might have blasted off into creative anarchy.

Despite the intermittent lags, the production proves to be more than a salvage operation thanks mainly to those engagingly choreographed performances, led by an irresistibly charismatic title turn from Alden Ehrenreich.