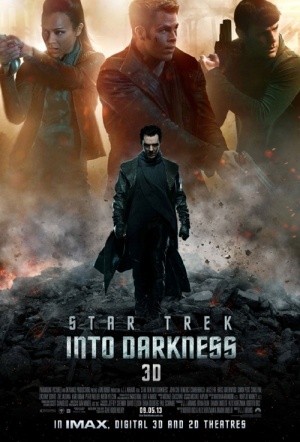 Chris Pine's Captain Kirk and Zachary Quinto's Spock return alongside Karl Urban, Simon Pegg, Zoe Saldana and newcomers Benedict Cumberbatch and Peter Weller in the sci-fi sequel to J.J. Abrams' beloved 2009 Star Trek reboot. When the crew of the Enterprise is called back home to Earth, they find John Harrison (Cumberbatch), a powerful figure with a thirst for vengeance, has begun to wage a one man war on Starfleet. With a personal score to settle, Captain Kirk leads his crew in pursuit of this fugitive, but if Harrison's strength and cunning prove a match for the whole fleet, what hope does the young crew of the Enterprise have of bringing him to justice - and what price will they have to pay?

May not boldly go where no "Trek" adventure has gone before, but getting there is such a well-crafted, immensely pleasurable ride that it would be positively Vulcan to nitpick.

Efficiently delivers what it's built to do, but without style or personality.