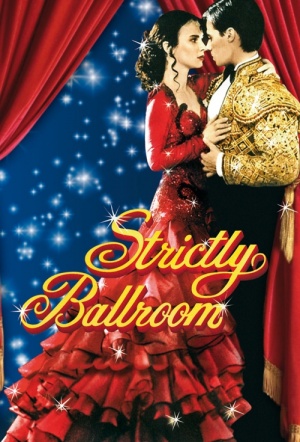 The offbeat romantic comedy that introduced the talents of Australian filmmaker Baz Luhrmann. This is the first in Luhrmann's 'Red Curtain trilogy' - followed by Romeo + Juliet and Moulin Rouge!. The story follows a maverick dancer (Paul Mercurio) who ditches the accepted rules of ballroom dancing to create his own style and choreography - a step which infuriates the dancing establishment.

Adapted from a stageplay conceived by Luhrman while studying at the National Institute of Dramatic Arts in Sydney, Strictly Ballroom was a winner at the Cannes and Toronto film festivals, at the BAFTAs and the Australian Film Institute Awards.

Crucially, the film's enormous charm is never rammed down the throat, but acknowledged for the calculating ploy it is, with a winning, ironic wink.

[This] is, in short, pure corn. But it's corn that has been overlaid with a buoyant veneer of spangles and marabou, and with a tireless sense of fun.

The plot is as old as the hills, but the characters in the movie seem to come from another planet.

Fluff it may well be, but a more entertaining and engaging piece of fluff you'd be hard pushed to find.