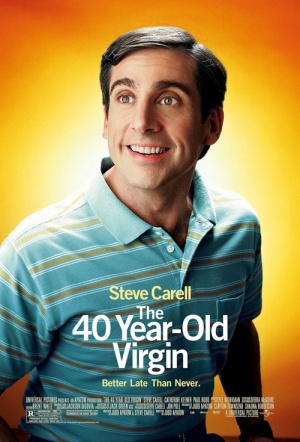 Acclaimed writer/director/producer Judd Apatow made his big-screen debut with this R-rated Steve Carell-starring comedy. During an innocent poker game with his pals (Seth Rogen, Paul Rudd, Romany Malco), the unintentionally abstinent Andy (Carell) accidentally reveals that he's a virgin. His buddies, all stunned, make it their mission to get him laid. But when Andy starts to bond with a nice, single mother (Catherine Keener), the pressure only, er, mounts. Co-stars Elizabeth Banks, Kat Dennings and Leslie Mann.

2005Rating: R16, Offensive language,drug use and sexual content that may offend116 minsUSA
ComedyRomance

A charmingly bent comedy about a likable geek's progress from action figures to real action.

Despite a very lowbrow premise, the profanity-packed script is hilarious, and it also has a good heart.

The film's innate sweetness carries it through the rough patches...

At its best it resembles one of those classic early-'80s comedies starring Steve Martin... boasting an acute mix of desperation, dignity, lunacy and indecorous wit.

Steve Carell plays the title character in a charmingly bent comedy about a likable geek's progress from action figures to real action.

Little more than an excuse for letting a bouncy team of sketch comics have their heads. Unlike most films pasted together in this way, it displays a certain cohesion.

Surprisingly insightful, as buddy comedies go, and it has a good heart and a lovable hero.

Overlong and slightly muddled, this is nevertheless an enjoyable showcase for the superb Steve Carell.

A ribald, risqué yet surprisingly warm-hearted vehicle for Steve Carell.