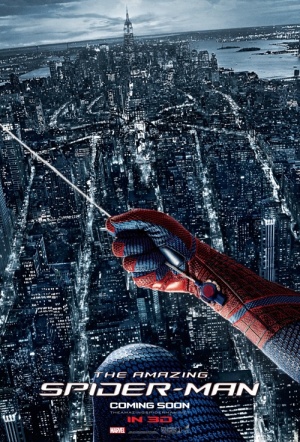 Spider-Man reboot billed as 'the untold story' of the web-slinger's origins. Andrew Garfield is Peter Parker, Emma Stone is Gwen Stacy and Rhys Ifans is The Lizard. Directed by Marc Webb (500 Days of Summer).

Abandoned by his parents as a boy, outcast Peter is raised by his Uncle Ben (Martin Sheen) and Aunt May (Sally Field). A quest to understand his parents' disappearance leads him to Oscorp and Dr. Curt Connors (Ifans), his father's former partner. At Oscorp he fakes his way into a lab where he is bit by a genetically-modified spider. Its venom endows the lanky teen with increased agility, strength and spider-like abilities and - after the death of Ben at the hand of a thief - Peter is soon sporting a mask and fighting crime as a New York folk hero.

When Connors tests an Oscorp serum on himself and mutates into The Lizard, Peter is faced with protecting the city from this massive threat while juggling his first high school crush, Gwen Stacy (Stone).

A mostly slick, entertaining and emotionally involving recombinations of fresh and familiar elements.

It's Spider-Man Begins Again, struggling in places to assert its own identity... [but] the leads charm, the action crackles and the grooves are well-laid for part two.

Feels like one of those unnecessary software versions, more Spider-Man 1.5 than Spider-Man reborn.

It's the successul synthesis of the action and emotion that means this Spider-Man is as enjoyable as it is impressive.

This is a more thoughtful film, and its action scenes are easier to follow in space and time. If we didn't really need to be told Spidey's origin story again, at least it's done with more detail and provides better reasons for why Peter Parker throws himself into his superhero role.

Director Marc Webb's action-adventure is grounded in a recognizable reality, but is also full of thrills. It's dark and mysterious, but doesn't skimp on fun.

Memorable in pieces but not as a whole.

It creates its own mythology, its own magic, and it’s own future. Spider-Man is dead. Long live Spider-Man.

This satisfying reboot slings a darker Spidey, a stronger romance and a welcome slew of tongue-in-cheek humor.

Graced with great performances from Garfield and Stone, [this is] a rare comic-book flick that is better at examining relationships than superheroism