The Chronicles of Narnia: The Voyage of the Dawn Treader 3D 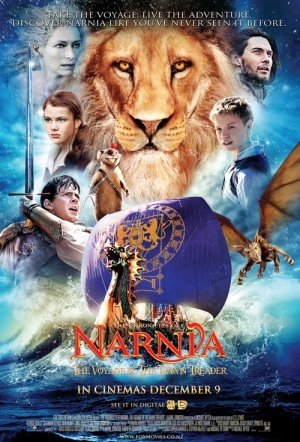 C.S. Lewis' third book in his series of seven, The Chronicles of Narnia – in digital 3D.

Lucy and Edmund (Georgie Henley and Skandar Keynes, returning from the previous two films) are spending a boring holiday with their cousin Eustace Clarence Stubb (Will Poulter) – a dull and mean little boy. When a painting of a ship on the wall of Lucy's wall comes to life, the three children are drawn into Narnia – dumped into the ocean to be rescued by the Dawn Treader.

On board is none other than King (formerly Prince) Caspian (Ben Barnes). The kids join Caspian on his search for the seven lost Lords of Narnia, to fulfil a promise to Aslan (Liam Neeson).

The Chronicles of Narnia: The Voyage of the Dawn Treader 3D / Reviews

This f/x-heavy third adaptation of the Christian-themed fantasy series feels routine and risk-averse in every respect, as if investment anxiety had fatally hobbled its sense of wonder.

All the wonders of a writer's imagination can conjure up and a filmmaker can translate onto the screen are captured in the Narnia series. The children for whom these films are made will hitch their own imaginations to the film and fly into Narnia land

While this film is the weakest of the three, these stories are so fantastical and memorable, the books so beloved, that The Dawn Treader is still a good vessel to board for kids of all ages.

After slipping badly with the second installment two years ago, the Narnia franchise does a full-on belly flop with this third.

Will never have the prestige or pretensions of the Potters or the Rings, but these films are still an enjoyable way to pass a couple of kid-friendly hours.

The Chronicles of Narnia: The Voyage of the Dawn Treader 3D / Trailers