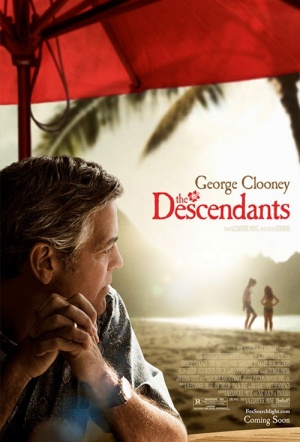 Land baron Matt (Clooney) is an indifferent husband and father forced to reevaluate life and face some unsettling truths after his wife suffers a coma-inducing boating accident. A personal crisis envelopes Matt, including strained relations with his two daughters and the bombshell revelation that his wife was cheating on him.

The Descendants is insistently sincere and positively sudsy.

It's hardly noticeable you're being enlightened while entertained.

A wryly compassionate vision of human fallibility that occasionally threatens to slip off-track.

A drama of unusual nuance and maturity.

The Descendants is damn near perfect.

We get vested in the lives of these characters. That's rare in a lot of movies.

This is Clooney's show and he is hands-down terrific.

The Descendants is something to be cherished.

Veers between the cutesy and the overly earnest.