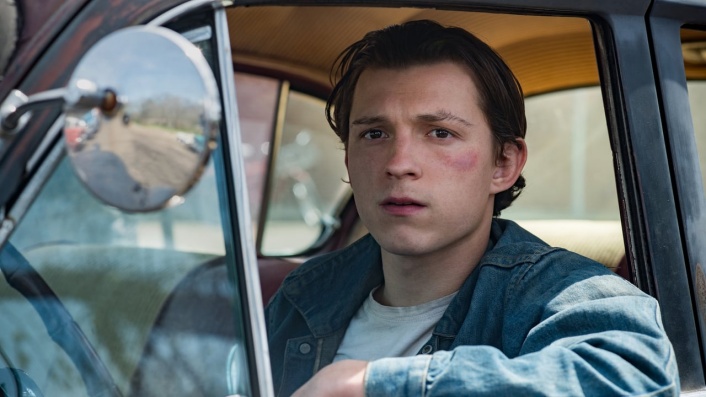 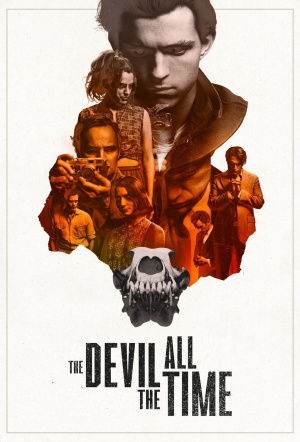 In Knockemstiff, Ohio and its neighboring backwoods, sinister characters — an unholy preacher (Pattinson), twisted couple (Clarke and Keough), and crooked sheriff (Stan) — converge around young Arvin Russell (Holland) as he fights the evil forces that threaten him and his family. Based on the novel by Donald Ray Pollock, which propted this vivid description from The Oregonian: "reads as if the love child of [Flannery] O'Connor and [William] Faulkner was captured by Cormac McCarthy, kept in a cage out back and forced to consume nothing but onion rings, Oxycontin and Terrence Malick's Badlands."

The Devil All the Time / Reviews

Might be Campos at his most openly entertaining. Men spiralling into an inescapable vortex of violence, scored to rollicking fifties-sixties country blues and gospel. A live-wire, angsty Tom Holland taking hammers to bullies. Robert Pattinson sleazing up the screen with a lip-smacking preacher performance for the ages.

In the end, that strength is also The Devil All the Time’s weakness, striving a little too much for style over substance.

Campos has such reverence for the novel that he has illustrated it more than he's dramatized it.

Despite an arresting tone, and several memorable individual scenes, the film struggles somewhat to engage on a character level.

A mixed bag of bones and bodies, whose Southern Gothic atmosphere and superb performances - from Holland especially - are let down by the film's lack of narrative focus.

Though its structure doesn't always work to maximum effect, the grim picture gets more involving as it goes and benefits from a hell of a cast.

A violent but soulless meditation on faith taken to harrowing extremes, "The Devil All the Time" hurtles toward a constantly-hinted-at awful endgame, but by the time the final crash arrives, well, thank God it's over.

Sprawling and brutal, The Devil All the Time is not for the impatient or the squeamish.

Campos' greatest feat may be that he was able to wrangle a story as ripe and unwieldy as Devil... toeing a tricky line between art-house atmosphere and Southern Gothic soap opera, and somehow still managing to land on the grim side of fascinating.

It is a hard-boiled, blood-soaked story full of unsettled mood and unrelenting dread, with an impressive cast. That the runtime zips by and leaves you longing for more speaks volumes of this dark, often depressing thriller.

With "The Devil All the Time," director Antonio Campos and co-writer Paulo Campos pull off a difficult achievement. They make a long and very good movie without relying on the usual things that hold together a lengthy narrative.

What's haunting about The Devil All The Time-and, ultimately even a little hopeful-is this idea that there's a world beyond this world, where perhaps not everyone is so cruel or intense.

It's a film unbothered by comfort. Rather Campos thrusts the audience into faith's excesses without a moment to breathe. The talented ensemble -- sometimes underutilized in this bleak film -- follows his command undaunted.