Fun in any dimension

Younger fans of 'The Lord of the Rings' trilogy won't be disappointed with this return to Middle Earth, which delivers in spectacle and family-friendly adventure. After a slow beginning, 'The Hobbit: An Unexpected Journey' kicks into gear with a narrative of walking, chasing, escaping, running and hiding and that echoes 'The Fellowship of the Ring' to the point that it feels more like a Christmas family dinner reunion - with the likes of Christopher Lee, Elijah Wood, Andy Serkis, Ian McKellen and Cate Blanchett returning to reprise their 'Rings' roles.

As with 'King Kong' and 'The Return of the King,' Peter Jackson's return to Middle Earth is overlong - especially bearing in mind the brevity of Tolkein's source material. But Martin Freeman makes an excellent Bilbo and it's in his scenes with the likes of Andy Serkis' Gollum that the film excels. Whilst the narrative is occasionally flabby and the childish gags silly but fun, the technology on display is to the fore and it's hard not to be reminded of the 'Star Wars' prequel trilogy movies which often played more like an advert for what can be achieved with cutting-edge tech than solid examples of storytelling and character-building.

As for the high frame rate? It's not just the story that's lighter but the look too, and whilst the 3D looks great, it may take audiences time to adapt or even accept images so pristine that at times it's like being immersed in the latest 'Halo' game.

Like a computer game, once 'The Hobbit' gets going it's a fun ride that should keep little ones engrossed and die-hard 'Rings' fans happy. As for the rest of us? The technology on display, the locations, sets, costumes, make-up and weapons are, as we expect of the team behind 'The Lord of the Rings,' first rate and the spectacle on offer is suitably spectacular. But one can't help feeling that with a little more judicious editing and a little less desire to throw everything in from 'The Rings' in an attempt to cement links between the two trilogies, this could have been a far leaner, meaner and more satisfying introduction to the latest missive from Middle Earth.
0 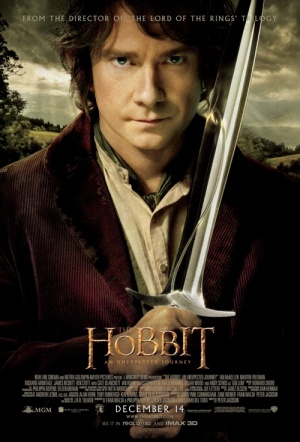 The Hobbit: An Unexpected Journey 3D