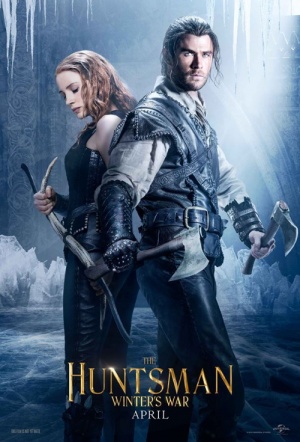 Charlize Theron and Chris Hemsworth return for this action fantasy follow-up to Snow White and the Huntsman, co-starring Emily Blunt and Jessica Chastain.

Long before the evil Queen Ravenna (Theron) was vanquished by Snow White’s blade, she watched silently as her sister, Freya (Blunt), suffered a heartbreaking betrayal and fled their kingdom. With Freya’s ability to freeze any enemy, the young ice queen has spent decades in a remote wintry palace raising a legion of deadly huntsmen - including Eric (Hemsworth) and warrior Sara (Chastain) - only to find that her prized two defied her one demand: Forever harden your hearts to love.

When Freya learns of her sister’s demise, she summons her remaining soldiers to bring the Magic Mirror home to the only sorceress left who can harness its power...

Kristen Stewart, who played Snow White in the first film, is not on the cast list. We'll let you decide whether that's a good thing or a bad thing.

Was anyone crying out for a sequel to Snow White and the Huntsman? Only one half of that duo returns for this instalment, although Snow White is constantly mentioned, somewhat awkwardly.

The sheer abundance of on-screen ornamentation isn’t quite enough to make The Huntsman: Winter’s War a beautiful film..

Not the fairest sequel, but it’s not so terrible that it deserves to be taken out to the forest and finished off.

A nuclear war of dullness.

It’s passably entertaining, and like the last one breathtakingly crafted...

It's a prequel, it's a sequel, and it's in no way equal to the movie that came before.

The script is a dog's breakfast, as is the editing and the over-all plot, which seems to change inexplicably throughout - but the cast is skilled enough to keep you interested.