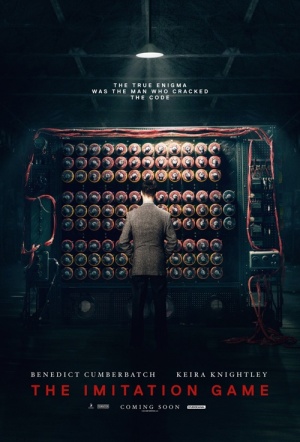 The director of Norwegian crime thriller Headhunters helms this World War II true story of Alan Turing (Benedict Cumberbatch) - the English mathematician and logician who set out to break the Enigma code used by the Nazis but was persecuted for his sexuality. Co-stars Keira Knightley, Matthew Goode and Mark Strong.

The story of British code-cracker Alan Turing is, in essence, about his significant role in World War II with his counter-invention to the German's Enigma machine. While the “modified” facts may raise an eyebrow and/or finger, The Imitation Game makes the “legend” of Turing abundantly clear: he was a flawed, courageous, ingenious individual who served a society that did not serve him or “his kind”.

The movie is undeniably strong in its sense of a bright light burned out too soon, and the often undignified fate of those who dare to chafe at society's established norms.

It’s all anchored in a storming performance from Cumberbatch: you’ll be deciphering his work long after the credits roll.

A highly conventional movie about a profoundly unusual man. This is not entirely a bad thing.

What Cumberbatch delivers is an impressively rounded character study of someone variously kind, prickly, aggressive, awkward and supremely confident. But it's almost too nuanced.

Cumberbatch has the ability to spin Turing's absence of tact into comedy and pathos.

An entirely credible portrait of genius at work.

A superb thriller and a worthy biopic of a real hero.