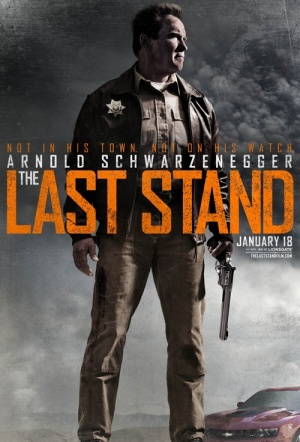 Arnold Schwarzenegger makes his action lead return (his first since 2002's Collateral Damage) as a lone sheriff forced to defend his sleepy border town from heavily-armed bandits. From Korean director Jee-woon Kim (I Saw the Devil), making his US feature debut.

After leaving his LAPD narcotics post following a bungled operation, Sheriff Ray Owens (Schwarzenegger) settled into a life fighting what little crime takes place in placid Sommerton Junction. That peaceful existence is shattered when Cortez (Eduardo Noriega), a notorious drug kingpin, escapes from a FBI prisoner convoy. With the help of a fierce band of lawless mercenaries, Cortez begins racing towards the US-Mexico border with a hostage in tow. His path: straight through Sommerton Junction, where the whole of the U.S. law enforcement, including Agent John Bannister (Forest Whitaker) will have their final opportunity to intercept him.

Schwarzenegger, when he's not plowing his way through reams of semi-intelligible dialogue, proves he's still capable of firing off a few rounds and pulling broken glass out of his leg.

Kim Jee-woon's riff on the western is an entertaining frolic back-loaded with gore and guffaws. Arnie's back!

Sorry, big guy, but making small talk with the locals at the diner just isn't you.

Korean film-maker Kim Jee-woon gives it plenty of directorial welly, and it's good to see a film with cop cars flying through the air.

May not herald a full-scale reemergence for Arnold the Action Star, but it's clearly a step in that direction.

An action star is (re)born.

Arnold ain't all he used to be but still has a little punch left in this just passable violent action potboiler.

Get through the plot and you'll be rewarded with 30 minutes of whirligig mayhem.