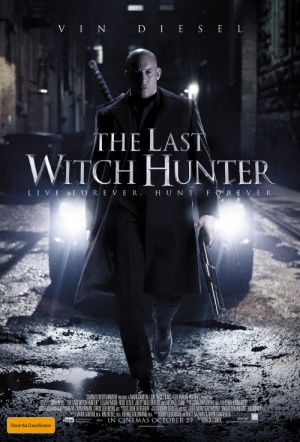 Vin Diesel is a witch-killer in this supernatural adventure set in modern day New York. From the director of The Crazies (remake), co-starring Elijah Wood, Michael Caine and Game of Thrones’ Rose Leslie.

Armies of witch hunters battled the unnatural enemy across the globe for centuries, including Kaulder (Diesel), a valiant warrior who managed to slay the all-powerful Queen Witch, decimating her followers in the process. In the moments right before her death, the Queen curses Kaulder with her own immortality, forever separating him from his beloved wife and daughter in the afterlife.

Today, Kaulder is the only one of his kind remaining and has spent centuries hunting down rogue witches, all the while yearning for his long-lost loved ones. However, unbeknownst to him, the Queen Witch is resurrected and seeks revenge on her killer causing an epic battle that will determine the survival of the human race.

If ‘Vin Diesel fights witches’ doesn’t have you running to the cinema, you can probably safely avoid The Last Witch Hunter, a movie that sadly fails to transcend that goofy premise. It’s the kind of film you assume must be based on a comic book, but isn’t.

The movie left me amazed - amazed that Nicolas Cage wasn't in it.

Diesel brings a self-aware sense of humour to what is far and away the nerdiest movie of the year...

The most glaring flaw of all is even more basic: there's not nearly enough witch hunting.

Dumb fun, to be sure, but fun nonetheless.

There are certainly enough dopey diversions here for The Last Witch Hunter to be considerably more fun than it is...

As Kaulder, Diesel does what he does, rumbling out lines of silly dialogue in his subwoofer of a voice. As far as acting goes, there’s not much.

Most will find this a rather too brassy affair, handicapped by incontinent plotting.

It's hokey as hell, but The Crazies director Breck Eisner plays it like a video game and keeps the teen fan-boy market onside...

A solid entertainment put together with confidence and a few decent jokes.

One of those artlessly restless, exposition-dialogue fantasy-action slogs.

Clogged with cardboard characters, flat dialogue and a sluggish middle act that gets lost in too much fabricated witchy folklore.