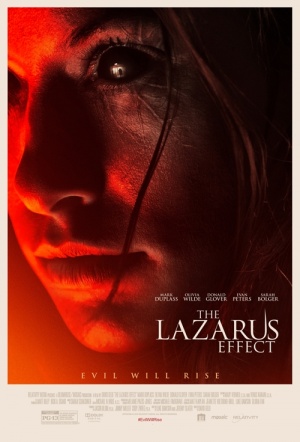 Olivia Wilde (Her), Mark Duplass (Safety Not Guaranteed) and Donald Glover (Community) lead this sci-fi horror from the director of Jiro Dreams of Sushi, following a group of scientists investigating the possibilities of bringing living creatures back from the dead.

During one experiment, Zoe (Wilde) accidentally succumbs to fatal electrocution. Unable to accept her death, Frank (Duplass) uses their discoveries to bring her back to life. But Zoe is no longer the woman the scientists knew, and the consequences of Frank’s premature act will bring sinister consequences...

[A] risible mix of pseudoscientific hokum and supernatural freakouts.

Despite an intriguing opening and an overqualified cast, The Lazarus Effect can't shake a been-there/resurrected-that vibe.

With solid performances, The Lazarus Effect simply doesn't rattle as many cages as it wants to, try as hard as it might.