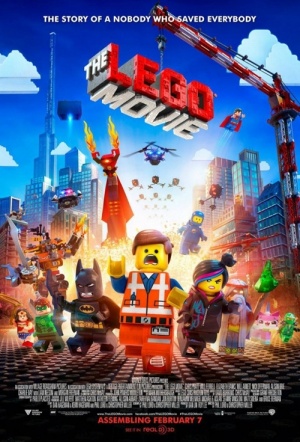 The directors of Cloudy with a Chance of Meatballs and TV's Robot Chicken bring LEGO to life in this stop-motion-simulating adventure. Emmet (Chris Pratt) - a run of the mill, follow-the-rules, decidedly average little LEGO man - is mistakenly identified as the most extraordinary person ever and the key to saving the world from the evil President Business (Will Ferrell). More

Emmet spends his days as one of many construction workers living repetitive, orderly lives under the reign of President Business, a crazed dictator masquerading as a benevolent ruler. When he unintentionally beats captivating stranger Wyldstyle (Elizabeth Banks) to a mysterious object, Emmet is identified as "The Special", prophesied to defeat the evil plans of Business and his right-hand man Bad Cop/Good Cop (Liam Neeson). Drafted into a fellowship of heroes by a powerful wizard (Morgan Freeman), Emmet teams up with Wyldstyle and Batman (Will Arnett) to save the LEGO universe. Along the way they'll also encounter Green Lantern, Superman, a pirate, a (usually) cute kitty, Star Wars characters, a mystical realm known as Middle Zealand and much more.

The Danish-made plastic toys have had many spin-offs including a number of movies, though this is their first major movie release into cinemas. Animation duties were carried out by Australia's Animal Logic studio (Happy Feet, Legend of the Guardians: The Owls of Ga'Hoole).

Irreverently deconstructs the state of the modern blockbuster...

Ridiculously funny and meticulously detailed... far better than a toy tie-in movie has any right to be. Despite a couple of dips, you'll be grinning throughout.

The script is witty, the satire surprisingly pointed, and the animation tactile and imaginative.

Parents will dab their eyes while the kids roll theirs.

The directors seem so spooked by fears of their young audience's short attention span that some of their best touches go by in a blur.

A film that's insane, witty, uneven and almost certain to delight anyone who's ever laid hands on Lego.

We aren’t aware of any way to watch The LEGO Movie 3D in New Zealand. If we’ve got that wrong, please contact us.