The Night Eats the World 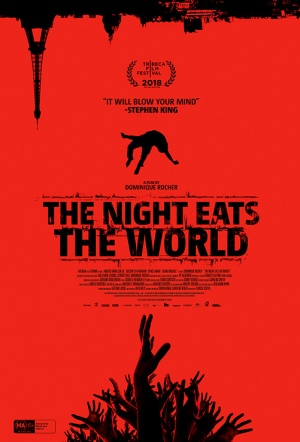 A man (Anders Danielsen Lie, Personal Shopper) wakes up the morning after a party to find Paris invaded by the undead in this French indie zombie film.

"One night, Sam attends a raucous apartment party in Paris. But, pressured to show up against his will and not feeling festive, the dejected Sam heads to a private room and falls asleep. The next morning, everything has changed: The walls are stained with blood, there isn’t a living soul in sight, and the dead have taken over the streets. Barricading himself inside, he hunkers down for safety, anticipating a long haul. As the undead congregate outside, Sam passes the lonely months by entertaining himself however possible. But there’s only so long he can hold on to his sanity — and he may not be truly alone." (Tribeca Film Festival)

The Night Eats the World / Reviews

If you don't get too hung up on the film's many contrivances - particularly its uninspired finale and any scene where Lie speaks - you might find The Night Eats the World to be sufficiently moody.

"The Night Eats the World" just feels like several rudderless months stuck in a building with a guy who probably wasn't all that fascinating before zombies struck, and isn't any more so now.

The makeup design and chase scenes are rote, and the little dramatic conflict - arguments over where to hide - traffic in the oldest clichés in the genre.

No matter how spare and arty "The Night Eats the World" is, there's nothing here that hasn't been done before.

Has some clever ideas and well-crafted moments, but in terms of horror fodder, it's so pared down you'll practically miss it if you blink.

...plays out like a French indie I Am Legend, with lashings of 28 Days Later-style fast paced action and surprising moments of existential rumination.