The Pirates! Band of Misfits 3D 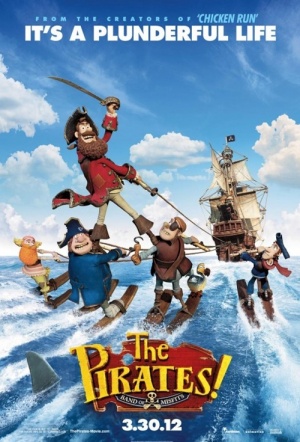 This is the high sea tales of a hapless band of pirates, lead by the incompetent Pirate Captain (Grant). Captain and his crew battle Black Bellamy (Piven) and Cutlass Liz (Hayek) in the fearsome 'Pirate of the Year' competition. On route, the met a young Charles Darwin (David Tennant) and battle Queen Victoria (Imelda Staunton).

After dipping its toes into pure CG animation for Arthur Christmas, Aardman integrates its feted old-school stop-motion technique with top-drawer visual effects to create the irrepressibly amusing The Pirates! Band of Misfits.

Though we’d love to see how Aardman handle Defoe’s followup, An Adventure With Communists, this amiable but overstretched diversion is unlikely to spawn a Caribbean franchise.

It is effortlessly and unassumingly funny - and terrifically smart.

Slick, sharp, funny and thrilling. Pirates! is never less than tremendous fun - but never quite a masterpiece.

A delightful romp whose varied pleasures should please kids all along the age spectrum.

Another Aardman triumph. The animation house’s most technically ambitious project so far and, if not quite at the genius level of Wallace & Gromit, still a comedy treasure and far too good just for kids.