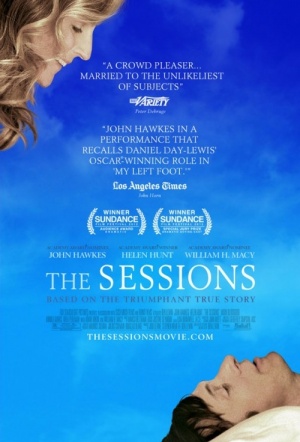 Audience Award winner at Sundance 2012, the story of a man (John Hawkes), paralysed from the neck down, determined to lose his virginity at the age of 38 – with the help of a sex therapist (Helen Hunt) and the guidance of his priest (William H. Macy). Based on the true story of California-based journalist and poet Mark O'Brien who became paralysed and confined to an iron lung due to polio.

The real heat of 'The Sessions' comes from its pitch-perfect sense of place, the free-spirited Berkeley of the 1980s.

A pleasant shock: a touching, profoundly sex-positive film that equates sex with intimacy, tenderness and emotional connection instead of performance, competition and conquest.

The transactions, O'Brien's growing self-awareness and the effect on those around him are explored with grace, humour and tenderness.

Mark is played by John Hawkes, who has emerged in recent years as an actor of amazing versatility. What he does here is not only physically challenging, but requires timing and emotion to elevate the story into realms of deep feeling and, astonishingly, even comedy.

In a country that embraces cinematic violence with such ease but blushingly prefers to keep sex in the shadows or under the sheets, the grown-up approach of "The Sessions" is rare.

At once entirely frank and downright cuddly in the way it deals with the seldom-visited subject of the sex lives of people with disabilities, this well-acted and constructed film will, at the very least, turn the spotlight on this unusual topic.

The emotional journey is articulated with so much nuance, and such a vigorous belief in human possibility, that everything [The Sessions] touches becomes its own, and is made new.