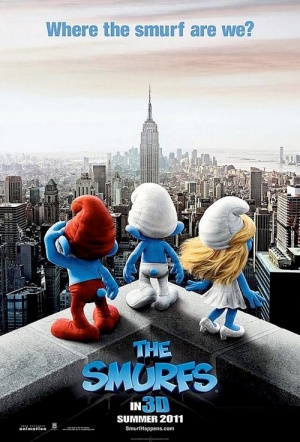 Based on the cartoon strip characters created in 1958 by Belgian cartoonist Peyo, and made famous to most by Hanna-Barbera's hit '80s television series, The Smurfs are back for a new 3D adventure.

When tyrant wizard Gargamel (Hank Azaria, The Simpsons) chases the Smurfs out of their village, they're forced through a portal, out of their world and into ours, landing in the middle of New York's Central Park. With the help of new human friends (Neil Patrick Harris and Jayma Mays) the Smurfs have to get home before Gargamel tracks them down.

More than that mushiness, though, it's the possibility of this frantic film spawning sequels that truly inspires thoughts of smurficide

Adorable and annoying, patently unnecessary yet kinda sweet, it's a calculated commercial enterprise with little soul but an appreciable amount of heart.

All 4-year-olds reading this review: You're going to love The Smurfs. Parents of said 4-year-olds there's not a whole lot in it for you in this big-screen adaptation of the 1980s TV cartoon.

Diverting and weird, but harmless.

It makes you think about deep things, man, such as your own mortality, which you may long for more than a few times during Raja Gosnell’s surreally awful live action–animation hybrid.

Those grown-up winks, along with an array of New York locations, make The Smurfs a surprisingly tolerable film for adults.

Easily pleased children and fans of the Teletubbies will enjoy it.

This noisy, live action/animated rendering of those wee mushroom-dwellers doesn’t bother trying to capture the essence of what made the Pierre “Peyo” Culliford-created characters such a curiously endearing phenomenon.

The Smurfs may be blue, but their movie is decidedly green, recycling discarded bits from other celluloid Happy Meals like Alvin and the Chipmunks, Garfield, and Hop into something half animated, half live action, and all careful studio calculation.

Small children may not notice the crassness of the script, cheapness of the gags and desperate mugging of the actors. Most older people will know exactly what this is: a huge, steaming pile of smurf.

There’s little reason for childless adults to see The Smurfs, unless they’re just curious to know how far filmmakers can go in using feigned sincerity to sell a thoroughly calculated, cynical product.