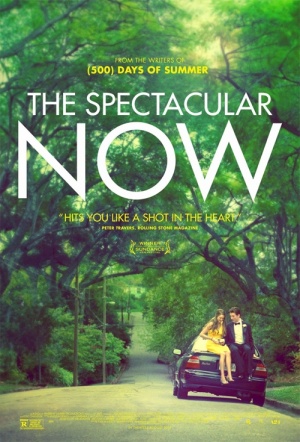 The writers of (500) Days of Summer and the director of the acclaimed indie drama Smashed bring this coming-of-age comedy about a charming drunk of a high school senior whose live-in-the-now philosophy is challenged upon meeting the not-so-typical 'nice girl'. Special Jury Prize winner at Sundance Film Festival 2013.

Sutter Keely (Miles Teller, 21 & Over) is the life of the party, loves his job at a men’s clothing store, and has no plans for the future. A budding alcoholic, he’s never far from his supersized, whisky-fortified thirst-master cup. But after being dumped by his girlfriend, Sutter gets drunk and wakes up on a lawn with Aimee Finicky (Shailene Woodley, The Descendants) hovering over him. She’s different: the 'nice girl' who reads science fiction and doesn’t have a boyfriend. While Amy has dreams of a future, Sutter lives in the impressive delusion of a spectacular now.

This bittersweet ode to the moment of childhood's end builds quietly to a pitch-perfect finale.

You watch the movie with your heart in your throat.

Ably charts a journey through the high stakes of adolescence, with both Sutter and Mr. Teller showing great promise.

Young adulthood is rarely portrayed with such conviction.

Here is a lovely film about two high school seniors who look, speak and feel like real 18-year-old middle-American human beings. Do you have any idea how rare that is?

A sincere, refreshingly unaffected look at teenagers and their attitudes about the future.