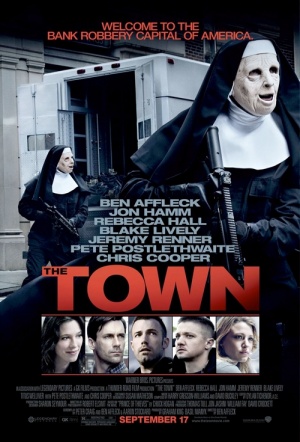 Boston-set romantic thriller starring and directed by Ben Affleck. Based on the novel by Prince of Thieves by Chuck Hogan.

Doug (Affleck) is an unrepentant criminal, the de facto leader of a group of ruthless bank robbers who pride themselves in stealing what they want and getting out clean. A loner, Doug never has to fear losing anyone close to him until his gang's latest job, when they briefly took a hostage – bank manager, Claire (Rebecca Hall, Vicky Cristina Barcelona). Let her go unharmed, Claire is nervously aware that the robbers know her name and where she lives. She lets her guard down when she meets an unassuming fellow named Doug, not realising that he is the same man who only days earlier had terrorised her.

The behind-the-camera talent Ben Affleck displayed so bracingly in "Gone Baby Gone" is confirmed, if not significantly advanced, in The Town. Again proving a fine director of actors (this time with himself in a starring role), Affleck delivers another potent, serious-minded slice of pulp set on Boston's meanest streets, where loyalty among thieves runs thicker than blood.

A solid, minor entry in the annals of Boston crime drama. Not as florid as "The Departed" or as sadly soulful as "The Friends of Eddie Coyle" - or even as sticky and gamy as "Gone Baby Gone," Mr. Affleck's previous film.

Everything is here. It's an effective thriller, he (Affleck) works closely with actors, he has a feel for pacing. Yet I persist in finding chases and gun battles curiously boring.

Affleck keeps the film as fluid as the "Mystic River," and never forgets that Renner is his ace in the hole. The "Hurt Locker" star charges up every scene he's in with feral power, and is rewarded with one of the most exciting sequences seen in any action movie this decade.

A fast-paced, character-driven heist movie that combines robberies with romance and solidifies Affleck's reputation as an actor with a genuine gift for directing.

Affleck gets the tribalism of Boston's traditionally Irish-American enclaves; it's a defining force in his character's lives. But for all their well-played grit, those characters resolutely remain types, and for all the well-choreographed action, the outcome doesn't matter nearly as much as it should.

The Town is that rare beast, a grown-up genre flick, chock-full of compelling character dynamics and a clutch of pitch-perfect performances.

While by no means faultless, The Town is a cut above the average crime drama.

Scene - She didn't see anything