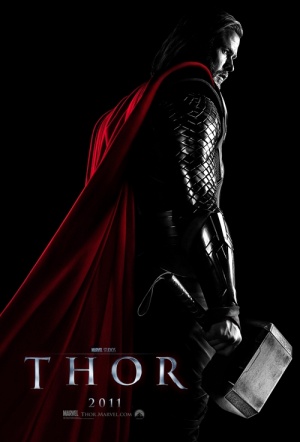 In this adaptation of the Marvel comic, the reckless actions of Thor (Chris Hemsworth, Star Trek) reignite an ancient, intergalactic war. The powerful warrior is cast out of the world of Asgard and sent to live amongst pesky humans on Earth as punishment. Here he becomes protector when the most dangerous villain of his world sends the dark forces of Asgard to attack Earth. Anthony Hopkins is Odin, King of Asgard, and Natalie Portman is earthbound scientist Jane Foster.

The film marks Portman's first foray into comic book movies. Of her decision, she said: "I just thought it sounded like a weird idea because [actor-director] Kenneth Branagh's directing it, so I was just like, 'Kenneth Branagh doing Thor is super-weird, I've gotta do it'."

Thor delivers the goods so long as butt is being kicked and family conflict is playing out in celestial dimensions, but is less thrilling during the Norse warrior god's rather brief banishment on Earth.

The most problematic hurdle in The Avengers’ path is cleared with ease and some style by a film that makes a virtue of its inherent silliness. You’re up, Captain America.

Turn off the snark-o-meter, and this is a return to form for Marvel, introducing a new hero we'll be happy to see again in, oh, about a year or so.