My favourite bits in the first AVENGERS movie were the entire audience bursting into uncontrollable, delighted laughter as Hulk suddenly sideswiped Thor, sending the God of Thunder flying off screen, and of course Hulk swinging Loki around like a rag doll, as he pulverised the trickster into the concrete floor.

Wacky, cartoonish, broad strokes slapstick scenes as joyous as they were totally unexpected.

Well, imagine the flavour of those two brief but beautiful scenes woven into an entire Marvel movie and you have THOR: RAGNAROK.

Taika Waititi (director of one of my all-time favourite family films, HUNT FOR THE WILDERPEOPLE), proves an inspired choice as director, bringing his off-kilter comedic chops to the hilarious double-act that is Thor and Hulk.

Think James Gunn’s GUARDIANS OF THE GALAXY and you have the style, a rainbow palette of gaudy colours and 1950s sci-fi novel covers come to life, in a big, bold, brash unashamedly comic-book delight, that never takes itself seriously. That’s probably its biggest fault too. It’s so busy having fun that drama, tension and you know, threat, never really get a foothold.

But if it’s entertainment you’re after, fun for the family and the best Marvel movie ride since GUARIANS VOL 1? Look no further! Taika Waititi delivers and delivers BIG in a movie that’s as rich in diversity (of both cast and crew) as it is in spectacle, comedy, action and outright fun with a capital F.

Yup, Taika takes the piss, laughing at the comic book silliness of it all, whilst simultaneously paying homage and showing respect. It’s a deft high-wire walk, but he pulls it off, striking the perfect balance of outrageous humour and nods to past Marvel movies and comic book lore.

All up, THOR 3 is dazzlingly designed popcorn fare for anyone who laughed it up in AVENGERS and GUARDIANS VOL 1, loved the spaced-out visuals of DR STRANGE, the warm-hearted humour of SPIDER-MAN: HOMECOMING, or the buddy comedy of ANT-MAN.

It all comes complete with cameos galore, and a few naughty wisecracks that’ll fly over the kids’ heads, but have adults inadvertently spitting out their popcorn.

Chris Hemsworth owns Thor, clearly having a ball in this third and easily best (as in best looking and most entertaining) of the THOR stand-alone Marvel trilogy. Forming his own team of, um, “Revengers”, Thor is joined in a wonderful double-act by both Mark Ruffalo’s Dr Banner and a pretty darn fine CGI Hulk.

Loki lovers rejoice, the Hiddleston (Tom) is back, long locks intact, as Thor’s trickster brother, but villain duties go here to the wonderful Cate Blanchett as Hela, kicking ass and stealing scenes as the God of Death.

But nobody steals scenes like Jeff Goldblum, who turns up the Goldbluming to eleven, narrowly beating the director’s hilarious voice performance as Kiwi-accented rock-monster, Korg.

Talking of rock monsters, the music rocks from the opening Led Zep-themed battle through to the end.

Easily the most fun family Marvel movie since the first GUARDIANS instalment, and yes, quite possibly one of the top five best comic book movies in the MCU (Marvel Cinematic Universe), THOR puts the rock in Ragnarok. 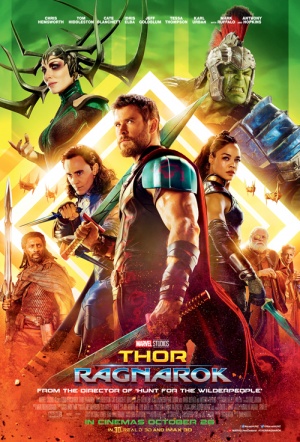