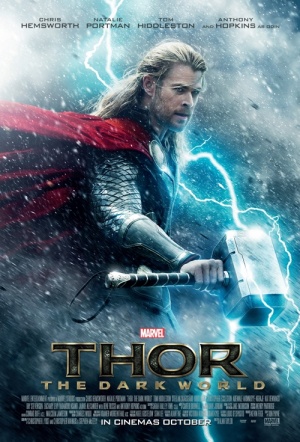 Marvel’s Thor returns in this post-Avengers battle to save Earth and all the nine Realms from a shadowy enemy that pre-dates the universe itself. Chris Hemsworth returns to the hammer, alongside Tom Hiddleston's Loki, Natalie Portman, Anthony Hopkins and Idris Elba under new director Alan Taylor (TV's Game of Thrones).

In the aftermath of Thor (2011) and The Avengers (2012), Thor fights to restore order across the cosmos. But an ancient race led by the vengeful Malekith (Christopher Eccleston) returns to plunge the universe back into darkness. Faced with an enemy that even Odin (Hopkins) and Asgard cannot withstand, Thor's task will reunite him with Jane Foster (Portman) and force him to sacrifice everything to save us all.

Marvel's man with the mallet does all that's required of him in a breakneck sequel that's never dark for long.

This is a grander, pacier film crammed with sprawling prog-rock landscapes, masked elf armies and giant spaceships over Greenwich.

Thanks to Hiddleston and Hemsworth's impressive collective charisma, [this is] far from a franchise killer.

Too much hammer time, not enough fun, except when Loki's onscreen.

As confident and assured as its lead character, Marvel's great run continues.

Clip: Where were you?

Clip: I've Got This