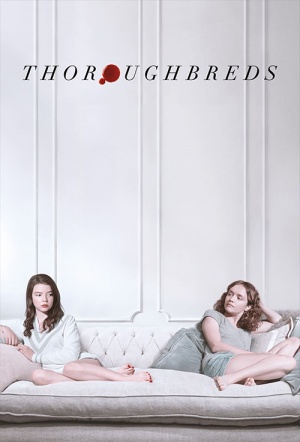 Childhood friends Lily (Anya Taylor-Joy, The Witch) and Amanda (Olivia Cooke, Me and Earl and the Dying Girl) reconnect in suburban Connecticut after years of growing apart. Though they initially seem completely at odds, the pair bond over Lily’s contempt for her oppressive stepfather, Mark, and as their friendship grows, they begin to bring out one another’s most destructive tendencies. Their ambitions lead them to hire a local hustler, Tim, and take matters into their own hands to set their lives straight.

Thoroughbred is light on story, and could probably use a little padding out... but it nonetheless impresses with its mordant humour and grim, gliding style.

Thoroughbreds plunges you into an ice-cold bath of amorality, but debuting writer-director Cory Finley has such a command of details that you'll laugh your way through the shivers.

For all the chatter and intrigue, Mr. Finley never settles on a point or theme.

Spending 90 minutes with a pair of teenage sociopaths may not sound like your idea of entertainment, but these two are a peculiarly nasty pleasure to be around, in part because they seem utterly indifferent to either your presence or your approval.

Finley ... combines a gift for tart and taut dialogue with a natural cinematic flair that heightens the drama.