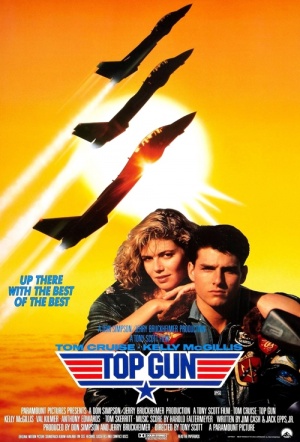 The Tom Cruise/Jerry Bruckheimer/Tony Scott Air Force blockbuster, 1986's highest grossing film, re-released in 3D. Maverick (Cruise, in a career-defining role) is a rebel, hotshot pilot, sent to the elite air combat training academy. There he competes with rival ace pilot Ice (Val Kilmer), for top honours. His hair-raising antics don't win him fans with senior officers, but his skills in the air do. Anthony Edwards stars as his mate Goose and Meg Ryan is Goose's wife, while Kelly McGillis is the civilian astrophysics instructor who “takes his breath away”.

Set in the world of naval fighter pilots, pic has strong visuals and pretty young people in stylish clothes and a non-stop soundtrack.

Take my breath away, indeed.

Once 'Top Gun... gets back to earth, the master of the skies is as clunky as a big land-bound bird.

Movies like "Top Gun" are hard to review because the good parts are so good and the bad parts are so relentless. The dogfights are absolutely the best since Clint Eastwood's electrifying aerial scenes in "Firefox." But look out for the scenes where the people talk to one another.

Not exactly a cinema classic but it has not only become a cultural icon but remains infinitely rewatchable.

The guys get incredible action sequences and simple buddy-bonding emotional moments. And the ladies get an amazing Tom Cruise playing the romantic lead while retaining an impetuous, unpredictable and exciting nature that adds depth to this on-the-surface shallow movie.