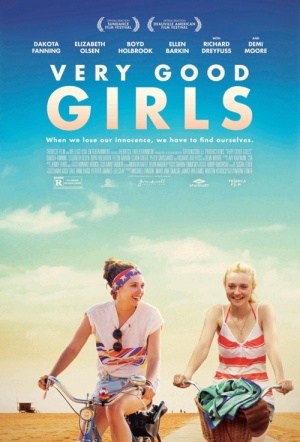 Dakota Fanning and Elizabeth Olsen are best friends spending their last summer at home in New York City before parting ways for college in this indie drama. The directorial debut from screenwriter Naomi Foner (Running on Empty).

"The girls meet Brooklyn boy David (Boyd Holbrook), whom they both fall for, and Lilly (Fanning) soon begins a secret relationship with him. As Lilly’s home life falls apart after she discovers her father’s affair and Gerry (Olsen) becomes more obsessed with David, Lilly seeks solace in her first romance. However, a tragedy in Gerry’s family catapults Lilly back into reality, and she must face the consequences of her actions... Naomi Foner’s intimate story emanates a raw nostalgia for that painful time when we waver precariously between adolescence and young adulthood." (Sundance Film Festival)

With a screenplay lacking the freshness and credibility of Foner's best work, this all-around misfire saddles a miscast group of name thesps with some strikingly awful costume design.