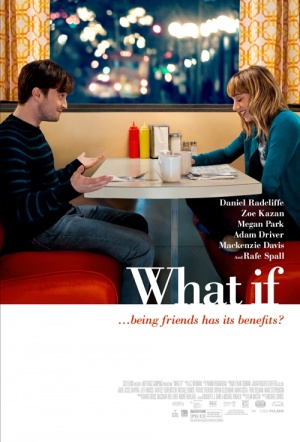 Daniel Radcliffe (Harry Potter) and Zoe Kazan (Ruby Sparks) star in this not-quite-a-rom-com about a single young man and a taken young woman who meet and kick it off instantly. In their situation, perhaps “just being friends” is more important than anything else. Co-stars Adam Driver (Inside Llewyn Davis), Mackenzie Davis (Are We Officially Dating?) and Rafe Spall (I Give It a Year).

Medical school dropout Wallace (Radcliffe) has been repeatedly burned by bad relationships. So while everyone around him, including his roommate Allan (Driver) seems to be finding the perfect partner (Davis), Wallace decides to put his love life on hold. It is then that he meets Chantry (Kazan), an animator who lives with her long-time boyfriend Ben (Spall). Wallace and Chantry form an instant connection, striking up a close friendship. Still, there is no denying the chemistry between them, leading the pair to wonder, what if the love of your life is actually your best friend?

A winning diversion that punches well above its weight thanks to two well-cast leads and a terrific supporting turn from Driver.

For a kid who grew up in public and is worth an estimated 60 million, Daniel Radcliffe does a convincing job of playing a normal guy.

While Radcliffe and Kazan do their best with this skimpy material, their back-and-forth banter is, like, super-annoying?

Well-scripted rom-com is a strong post-Potter step for Radcliffe.

Formulaic, familiar and predictable, but also likable and well-cast, with enough verve to keep it out of the rom-com bargain bucket.