Like the recent GHOSTBUSTERS, there’s a temptation to overlook the faults and praise it for merely existing, but MONSTER director, Patty Jenkins, delivers a fun adventure, comic book origin story, and female-centric action blockbuster. There are issues, from some dodgy CGI and clunky dialogue, ill-defined villains and a messy third act throwdown, but that doesn’t stop WONDER WOMAN being easily the best of the DC superhero movies by a long lasso of truth.

Gal Gadot is great in the lead, as are supporting cast, (Robin Wright, Connie Nielsen, David Thewlis, Lucy Davis, Ewen Bremner, Lisa Loven Kongsli and Danny Huston), but the most fun’s to be had in Chris Pine’s character, embracing the traditionally female-in-peril role in a feminist role-reversal that’s played both for laughs, and to make a damn fine point.

Eschewing the square-jawed, macho, seriousness that blunted DCs recent po-faced SUPERMAN movies, WONDER WOMAN is funny, fun and fantastical. Ignore those refusing to notice how much it nicks from Marvel’s CAPTAIN AMERICA origin movie, because by doing so, this is the nearest DC have yet come to the colourful, comedic camaraderie of Marvel’s movies, and it’s all the more entertaining for it.
0 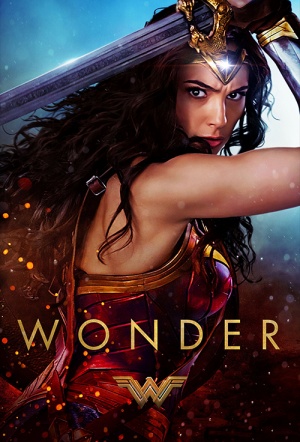