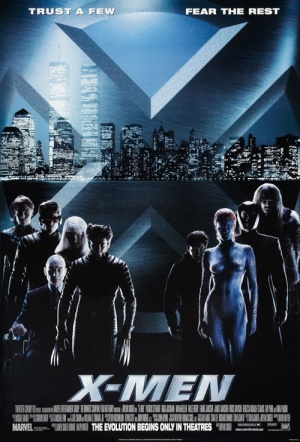 Two mutants, Rogue (Paquin) and Wolverine (Jackman), come to a private academy for their kind whose resident superhero team, the X-Men, must oppose a terrorist organisation with similar powers.

It ain't saying much but, when it comes to stoopid fun, X-Men could be the summer movie to beat.

X-Men plays like a so-so middle chapter of an epic series rather than a fitting kickoff.

Apart from the brushed metal production design and pin-sharp camerawork, this offers only moderate excitement.

Clumsy when it should be light on its feet, the movie takes itself even more seriously than the comic book and its fans do, which is a superheroic achievement.

It sucks that this choppily edited film appears rushed and incoherent in ways that cheat the story of its human resonance and the stunts of their anticipated pow.

The events that end the movie are sort of anticlimactic, and the special effects, while energetic, are not as persuasive as they might be.

An accomplished piece of work with considerable pulp watchability to it.