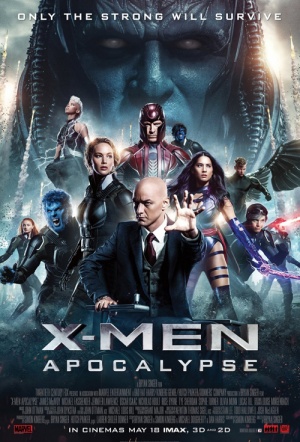 Filmmaker Bryan Singer follows up his X-Men, X-Men 2 and Days of Future Past (as well as Matthew Vaughn’s First Class) with this all-encompassing entry to the Marvel mutant superhero franchise.

Apocalypse, the first and most powerful mutant from Marvel's X-Men universe, amassed the powers of many other mutants, becoming immortal and invincible - worshipped as a god. Upon awakening after thousands of years, he is disillusioned with the world and recruits a team of mutants, including a disheartened Magneto (Michael Fassbender), to cleanse mankind and create a new world order, over which he will reign. As the fate of the Earth hangs in the balance, Raven (Jennifer Lawrence) with the help of Professor X (James McAvoy) must lead a team of young X-Men to stop their greatest nemesis and save mankind.

Bryan Singer follows Matthew Vaughn’s excellent First Class and his own superb Days of Future Past with the disappointing Apocalypse. It’s not a bewildering Batman V Superman kind of disappointment. It’s the kind that’s felt when a sequel sidelines every great thing the franchise has built towards in favour of a dull and dour plot surrounding a bad guy who looks like he should be chasing the Power Rangers.

Although the X-Men ensembles are usually large, there are simply too many characters for the action-heavy “Apocalypse” to properly juggle.

The biggest X-Men movie yet doesn’t scrimp on carnage, but lacks the heft of Singer’s previous instalments.

There are no memorable action scenes... And the script is just nonsense...

Better than Batman v Superman: Dawn of Justice, but not by an awful lot...

Certainly provides bangs for your buck, although there is less space for the surreal strangeness of the X-Men to breathe, less dialogue interest, and they do not have the looser, wittier joy of the Avengers...

It lacks the swagger and ingenuity of Deadpool, or the gravitas and allegory potential of Captain America: Civil War, or even the last two X-outings.

Despite the undeniable presence of a huge amount of action, X-Men: Apocalypse is decidedly a case of more is less...

A blockbuster with heart, soul, and brains.

Messier and heavier than Days Of Future Past, this is not so much the next step in the X-Men’s evolution as a failed callback to past glories.