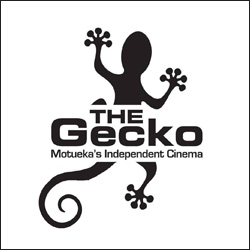 23B Wallace Street, Motueka
The only boutique cinema in the top of the south bringing festival quality films all year. To book tickets, email gecko.theatre@xtra.co.nz. Full Details

The only boutique cinema in the top of the south, bringing festival quality films all year, complete with two screens - the small cinema seating ten and the large one seating 31 - designed in a way that even the tallest person in the world won’t block your view. Cinemas include ample leg room, comfortable couches and armchairs, as well as footrests, coffee tables, and even blankets for those wanting extra cosiness. The snack bar provides organic coffee and juices, selection of teas, creamy hot chocolate, New Zealand made gourmet ice-creams and sorbets, as well as the usual treats and - of course - pop-corn.

$14 Monday to Wednesday (Except special screenings and public holidays)

The Gecko project started in 2000, back when Motueka had no cinema. Five friends got together and decided that Motueka really needed to have its own movie theatre. After over a year of preparation and market research, the project was taking form. Having very little funds and refused loans from the local banks, they held a public meeting to see if finding enthusiastic movie lovers to invest in the project was a possibility. Indeed it was! Around 30 people invested in the Gecko and became shareholders.

After struggling to find a suitable venue for a while, the Gecko (version 1) opened its door on Motueka High Street in 2003. The first venue only had one screen with 25 seats. The Gecko was the first fully digital cinema of the region as well as the first and (still is) only lounge movie theatre in the area - referred to as the only boutique cinema in the top of the south.

In 2007, the Gecko relocated to its current venue at 23b Wallace Street, increasing its capacity with one screen of 31 seats and a smaller screen of 10 seats.

Know more about this history of this cinema? Let us know.