Not only had I managed to avoid all spoilers, but I had also pretty much forgotten nearly everything I knew about the original Cloverfield (apart from the sneaking suspicion that I had actually enjoyed the antics of that film’s videotaping idiots more before the monster arrived. Yeah, Cloverfield wasn’t that great, was it…?). So all up I was pretty well-placed to watch 10 Cloverfield Lane as a small-scale, baggage-free, stand-alone thriller - in the end, I’d say that’s definitely the best way to go into it.

Essentially what you’ve got (for the most part) is a low-budget but expertly crafted slow-burn suspenser made with just enough Hollywood slickness to keep it from venturing into the territory of the genuinely uncomfortable. The reason that it stays so gripping throughout is twofold. The writing is whip-smart, managing to be blackly funny (great games night), often unpredictable, and with good instincts about when to drop in the occasional hoary thriller cliche for maximum effect. And the performances are top-notch - John Goodman seems to be getting all the plaudits, but the movie stands or falls on Mary Elizabeth Winstead, who takes the tired and potentially thankless role of tank-topped victim and turns it into a movie-star vehicle through sheer force of will - she completely owns this thing from first frame to last.

The final act isn’t going to be to everybody’s taste, but despite the fact that the subject matter might seem like a major departure from what went before it, the playful tone and moderately deranged energy are all of apiece. True, the tension evaporates long before the credits roll, but I was still having plenty of fun and would have been happy to stick around for another twenty minutes just to see what shenanigans Winstead’s Michelle got into next. Overall, super popcorn entertainment.
0 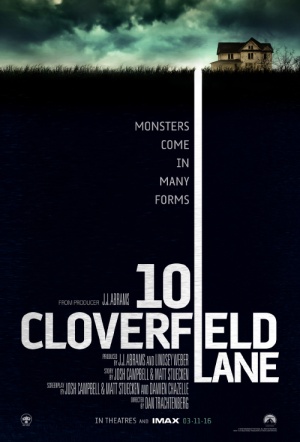