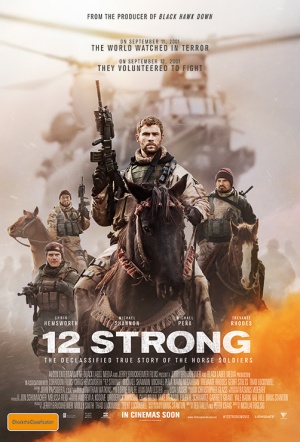 Following 9/11, Chris Hemsworth leads a team of U.S. Special Forces into Afghanistan where they must learn to fight on horseback.

A U.S. Special Forces team, led by their new Captain, Mitch Nelson (Hemsworth), is chosen to be the first U.S. troops sent into Afghanistan for an extremely dangerous mission. There, in the rugged mountains, they must convince Northern Alliance General Dostum (Navid Negahban) to join forces with them to fight the Taliban and their Al Qaeda allies. In addition to overcoming mutual distrust and a vast cultural divide, the Americans — accustomed to state-of-the-art warfare — must adopt the rudimentary tactics of the Afghani horse soldiers. But despite their uneasy bond, the new allies face overwhelming odds: outnumbered and outgunned by a ruthless enemy that does not take prisoners.

On its own terms, the film is watchable enough, but it’s blunt and stolid and under-characterised, and at 130 minutes it plods.

If you want to feel good about a war with no end, this one’s for you.

For devotees of cinematic blowouts and dedicated students of screen masculinity (like me), "12 Strong" is premium, Grade A catnip.

What 12 Strong does deliver, however, is a rousing tribute to the bravery of soldiers whose contributions went unheralded for years. That impact cannot be denied.

What makes "12 Strong" objectionable - and what will also make it appealing to some - is its attempt to induce a kind of amnesia in the audience ...

It's virtually all Hemsworth's show and he's entirely up to the task of carrying the film on his broad shoulders...

Entertaining enough, as long as you don’t ever expect it to step outside its exceedingly specific remit.

... stirring and solid, "12 Strong" is the kind of film that might make you think twice about January releases, and spotlights a riveting story in our recent history that many Americans might not know.