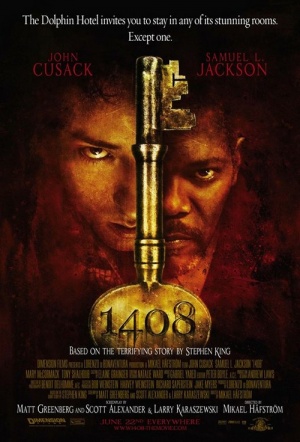 Based on the Stephen King short story, this follows novelist Mike Enslin’s (Cusack) investigation of the famously haunted room 1408 at the Dolphin Hotel. He goes with the intent of disproving it’s claimed paranormal activity.

Enslin has made a career of it – with a string of bestsellers discrediting haunted houses & graveyards. This is his latest project. Despite overly stern warnings from the Dolphin’s manager (Jackson) and the room’s penchant for death, Enslin checks in. Soon enough, the myth of room 1408 begins to manifest itself with apparitions and violent paranormal commotion. Enslin’s skepticism is replaced with fear as he tries to break free from the haunting.
2007Rating: M, contains supernatural themes & violence94 minsUSA

The movie is most effective in its early scenes of prickly menace, and while the Dolphin is no Overlook (the haunted hotel in "The Shining"), its old-world creepiness is exactly right...

Even with its flaws, 1408 deserves to be appreciated by connoisseurs of acting and bravura filmmaking...

This is the old stuff, the good stuff, the tried-and-true stuff of shrewdly accomplished audience manipulation...

While 1408 is no classic, it is refreshing to see a horror picture that just wants to do its job rather than prove to its audience how ruthlessly nihilistic it is....

1408 isn’t great cinema, but does an adequate job in spite of its flaws...

Directed in a style that suggests Sam Raimi (Evil Dead) meets Alfred Hitchcock, Hafstrom has delivered the scariest movie of the year and the second film of 2007 to make you appreciate the music of The Carpenters in a new light...