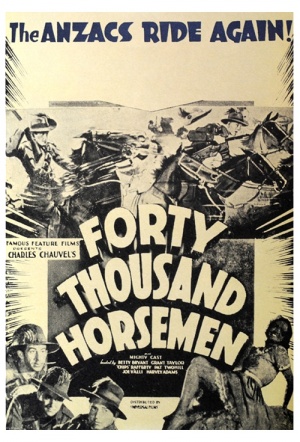 The Sydney Morning Herald said on release: "There have been some good Australian films before this one, but Forty Thousand Horsemen has every right to be regarded as the first really great Australian picture."

Director Chauvel was the nephew of Sir Harry Chauvel, commander of the Australian Light Horse. The film was shot in Cronulla, with money raised independently and with the assistance of Universal Pictures Australia and Hoyts Australia.

Never before has an Australian producer-director attempted a mass spectacle on this scale... The sequence representing the famous charge of the Australian Light Horse at Beersheba is as dynamic in its dramatic realism and sustained battle

action as any imaginitive Hollywood or English producer could have made it... Most important of all is the laconic note of Australian casualness and humour running through the narrative.