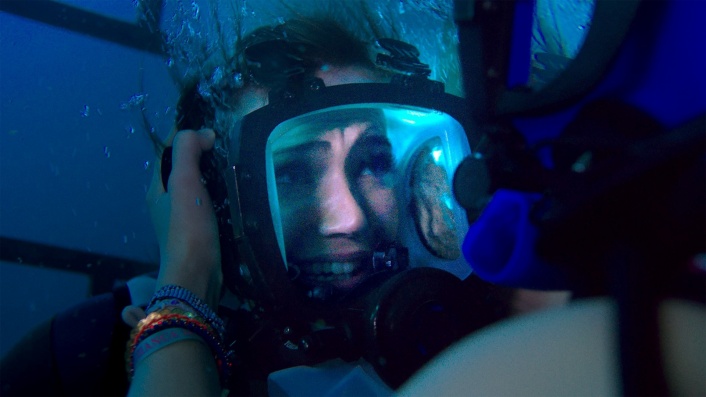 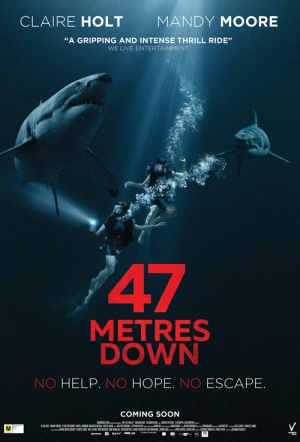 Two sisters (Mandy Moore and Claire Holt from The Vampire Diaries) vacationing in Mexico are the victims of a shark cage diving trip gone wrong. More

A technical fault leaves Lisa and Kate's shark viewing cage stranded on the ocean floor. With oxygen running low and great whites circling nearby, they have less than an hour of air left to figure out how to get to the surface.

Had 47 Metres Down materialised around the same time as The Shallows last year, it would have been written off as a lesser clone. Compared to Jaume Collet-Serra’s surprisingly well-received shark shocker, Johannes Roberts’ film exudes a distinctly direct-to-video feel, from its generic title to the uninspired casting of Mandy Moore and Matthew Modine, neither particularly enticing draw cards. However, with some distance, this thriller can occupy a space as the kind of tidy, efficient B-movie genre fans welcome every now and then — a satisfying palate-cleanser to alleviate the fatigue of blockbuster franchises. And while it isn’t necessarily a better movie, 47 Metres Down shouldn’t be sniffed at, its plum supply of nerve-wracking scenarios capably playing to our phobias of deep sea depths and hungry sharks.

A formulaic but effective thriller about two sisters trapped beneath the waves in shark-infested waters.

This low budget but highly-effective horror film is exactly the kind of movie that legendary Hollywood D-movie producer Roger Corman would have knocked out in the '70s: plenty of writhing female limbs, no surprises.

"47 Meters Down" - despite a clever final section - struggles to extract tension from clamour and agitation.

An unpretentious film whose destiny it is to toil in the shadow of Steven Spielberg's Jaws.

A movie that revels in its ability to renovate the cliches of horror in a new setting.

A shallow dip back into Jaws territory.

Even the conclusion, which by its very construction should be purely thrilling, is needlessly complicated and confounded by a callback to a warning given to Lisa and Kate early in the film.

Johannes Roberts’ effective thriller doubles down on its recent predecessor by placing not one but two attractive women in aquatic jeopardy.

It’s tense, edge-of-your-seat stuff… for a while.

A fiendishly effective holiday-gone-wrong thriller that's better at cranking up the agoraphobic action than fleshing out its characters.

47 Metres Down is available to stream in New Zealand now on Apple TV and Academy On Demand.