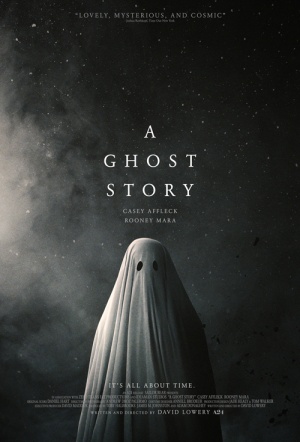 Casey Affleck posthumously returns to his home as a spirit and tries to reconnect with his former lover (Rooney Mara) in this David Lowery drama.

"Lowery's meticulously sparse narrative contemplates a spectral figure who was once a man (Affleck). Prematurely taken from this Earth, he makes his way toward his former home, where he is fated to remain forevermore. Shrouded in a white sheet, he observes the lament of his grief-stricken lover (Mara). Bearing unseen witness to her pain, the wisp stands sentry for years to come, interacting only with time as it hurtles further and further forward, the remnants of his humanity quietly evaporating." (Sundance Film Festival)

One of the – many – things that marks David Lowery’s A Ghost Story out from the pack is that it centres on a songwriter (Casey Affleck) who’s actually pretty good. The composition he plays halfway through the film is, in fact, Dark Rooms’ I Get Overwhelmed, a work of anxious, soaring beauty. Shame the film can’t reach such heights.

I found A Ghost Story mostly alienating, at times even annoying.

While Lowery's actual method of delivery may not be scary, it's sure to haunt those who open themselves up to the experience.

The film does, with great artistry and sincerity, the kind work of saying what so many of us have been thinking. It's our common late-night worries made manifest, then carried beyond our imagination.

The collision of aesthetics - a cartoonish, Halloween-costume-grade specter haunting a quiet indie - is the point where A Ghost Story asks the most of us. But how thrilling it is to be jostled.

A cheerful, funny, affectionate and endlessly loveable film about what it means to live a life.

A poetic meditation on time, memory and spiritual connection that is utterly true to its title.

'A Ghost Story' is inventive, tragic, moving, and told with a deft touch. It will haunt you.

A Ghost Story is a deliberate abstraction, and as such, it's easy to appreciate its conceptual audacity and its visual beauty.