Whilst I went in wanting to fall head over heels for The Impossible and The Orphanage director J.A. Bayona’s latest, I was left disappointed. Nicely acted, directed and shot, and a pleasant family film (I watched with mine), it fails to reach the heights of more ambitious fantasies, such as, say, Pan’s Labyrinth or the recent Okja.

Sigourney Weaver, Felicity Jones, Toby Kebbell, Liam Neeson (voicing the titular monster), and especially young Lewis MacDougall (as Conor, a kid with a terminally ill mother, and a highly active imagination) are all superb in their roles.

Opinion’s subjective, but for me at least, this was pretty underwhelming and unambitious storytelling. Patrick Ness, author of the novel on which it’s based, penned the screenplay, so perhaps the issue’s one of being too close to the book, rather than wholly embracing the visual storytelling of cinema.

Still, those less cynical and hard-hearted will appreciate its undoubted fairy tale warmth, but this monster gets a “meh” from me. 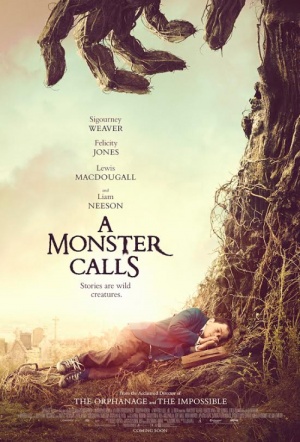