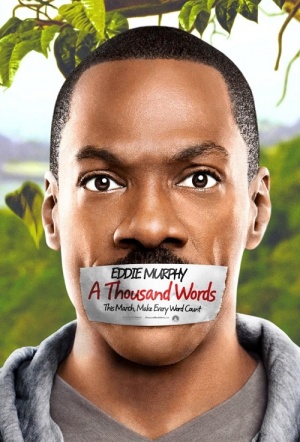 Comedy in which Eddie Murphy stars as Jack, a fast-talking book agent whose insincere patter bugs everyone he deals with, including the famous guru Dr Sinja (Cliff Curtis). From the director of Norbit.

After publishing Sinja's book, Jack suffers karmic repercussions from a magical Bodhi tree that suddenly appears in his backyard. The tree sheds one leaf for each word Jack speaks. After one thousand words, Jack will die.

A product... inoffensive, unsurprising and uninspiring.

The poster art for A Thousand Words shows Eddie Murphy with duct tape over his mouth, which as a promotional idea ranks right up there with Fred Astaire in leg irons.

The formulaic script doesn't manage to exploit the absurd premise with any discernible wit or invention, and the star is left floundering.

Every emotion is loudly broadcast, every development repeatedly telegraphed. Kids who can’t keep up with the demanding complexities of Sesame Street will be able to follow this one.