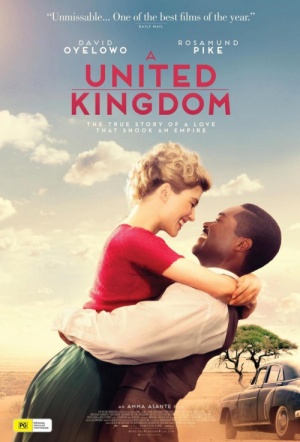 "London, 1947. Jazz lovers Seretse Khama and Ruth Williams meet at a Missionary Society dance. The evening is electric, perhaps in part because both know their attraction is fraught. She's an accomplished office worker, and white. He is a charming law student, and black. What he can't tell her at first is that he's also a prince, first in line to the throne of Bechuanaland (today's Botswana). But despite the obstacles, it's love.

"When the time comes for Seretse to return home to lead his people's independence movement, he impulsively proposes to Ruth. She accepts, but no one else does — not her family nor his. Neither does South Africa's government, which controls uranium Britain badly needs, and stands on the eve of making apartheid a national policy. They won't tolerate an interracial couple leading a neighbouring country, so Britain begins to work against what once seemed like the simple love between Seretse and Ruth." (Toronto International Film Festival)

Treats their love story like another Disney princess movie, reducing the drama to a series of polite disagreements between the couple and the cardboard officiates who opposed their union.

Oyelowo and Pike capture their characters' courage, but never the romance that kept their belief burning.

Exactly the film you imagine it's going to be: handsome, honey-coloured and simplistic.

...this movie has candour, heartfelt self-belief, and an unfashionable conviction that love conquers all - though not immediately.

It just misses the epic impact it's striving for.

For those in need of a gentle thought-provoking romantic distraction from the festive rush, you'd do far worse...

It glides romantically along on the surface while political turmoil boils away underneath. Its plea for tolerance isn't subtle, but it's a story that deserves to be told.

It's pleasant and honourable, and it makes a worthwhile point. But it's strangely lacking in urgency, a period piece that never breaks out of its period.