A group of friends party at a Chilean nightclub are affected by an earthquake with terror-inducing results. What follows is a thrilling venture to survive in the 'hot zone' knowing fully well that a Tsunami is arriving soon. This movie establishes an engaging narrative by continually defecting our minds from the impending tidal wave with more exposition of situational issues that the protagonists are faced with, whether it be escaping from the nightclub, using the ascending elevator or surviving out in the open.

Perhaps the most riveting aspect about this movie is the way the filmmakers not only captured the essence of environmental disaster but the fragility of the human mind in such cases. The further exposition that convicts escaped from a nearby prison, due to the earthquake, adds another layer of complexity which challenges the protagonists to speculate not only the dangers of the natural disaster but also the mistrust of strangers.

The horror elements are disturbingly amplified as these prison inmates exact their horrid acts of violence and murderous intent on the locals. This movie plays out more like a Horror movie than a disaster movie solely due to this added element of 'stranger danger'.

What was equally more intriguing and cinematically effective was the pure inconceivability of the events to unfold as we are constantly 'blindsided' with the sequence of 'random' events. The fact that the inmates posed as Firefighters also proved unpredictable, as is the unpredictability of the various death of the protagonists towards the end of this movie.

As we come to envision a brutally realistic phenomenon of human nature, we come to sympathise with the 2 survivors as they subdue their villainous attackers. However, this film brings us back to the original issue at hand, as the survivors watch helplessly to a giant Tsunami, with their courageous survival attempts undermined significantly in narrative and emotionally as a viewer.

Although this film captures a realistic depiction of profane humanistic behaviours, its surreal documentation of the natural events become progressively ambiguous. The poor editing, sub-par acting performances and below-average script ultimately undermines the authentic rendition we were expecting in such a movie.

At the beginning, we can relate to the different characters on a superficial level as they go about enjoying the nightclub. However, there is not much character development and intricacies in each character for them to be appreciated as they react to the dangers of the natural events. Even though we (the viewers) revel in the graphical brilliance of the natural disaster, it is the raw human behaviourisms that upholds a higher priority to effectiveness than the disaster itself. With poor character introspection and extrospection depicted in the film, I Can't help but not feel a sense of helplessness for them in the midst of this disaster.

In the midst of moral and environmental chaos, I wasn't particularly convinced by realism depicted of most characters. It just felt like most of the characters failed to illustrate the need to seek higher ground or demonstrate acting prowess to elevate the this movie's reputation. On the grasps of 'moral panic', one where predatory inmates assault their victims and become murderous, is conflictedly contrasted by the impending doom of the tidal wave for the 2 survivors.

As a cinematic experience, this felt more like a 'rug pulled from beneath' rather than the supposedly riveting 'finisher' that this movie deserved. This is mainly due to the already conceivable notion of the incoming Tsunami from the beginning of the earthquake. As such, this movie fails to reach great heights and gets washed away in the sea of mediocre Horror films. 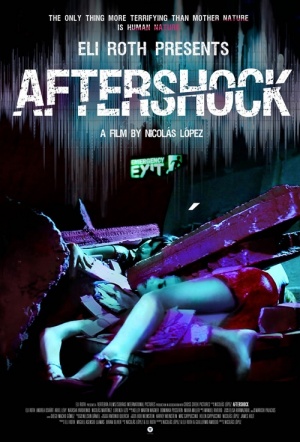