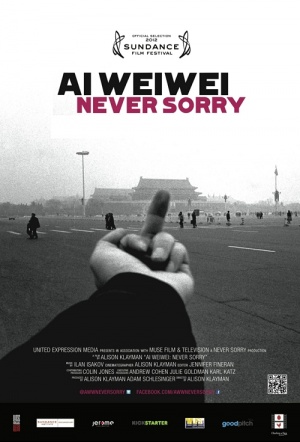 Sundance-winning documentary on contemporary Chinese artist, architect and activist Ai Weiwei - covering his career and persecution at the hands of the Chinese state.

"Director Alison Klayman chronicles the complexities of Ai's life for three years, beginning with his rise to public prominence via blogs and Twitter. The record continues through his widely publicised arrest in Beijing in April of 2011. As Ai prepares various works of art for major international exhibitions, his activism heats up, and his run-ins with China's authorities become more and more frequent. Klayman’s camera captures his forthrightness and unequivocal stance. She gives a larger picture of the artist as an individual, a symbol of China’s oppression, and a powerful voice against a country that still denies its citizens many basic freedoms." (Sundance Film Festival)