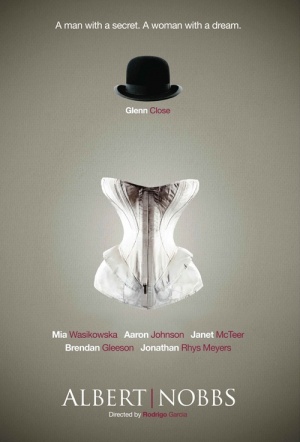 Glenn Close (Dangerous Liasons) dons a top hat in this drama about a woman posing as a male butler in 19th Century Ireland.

During an era where female independence was non-existent and discouraged, Albert Nobbs (Close) escapes a life of poverty and despair by disguising herself as a “himself.” However, she seeks to dismantle her 30-year façade after meeting a handsome painter. While trying to reconstruct an ordinary life, she acquires the company of a gorgeous young house maid (Mia Wasikowska, Jane Eyre), who has her own man-seeking agendas.

This is the third big-screen pairing of Glenn Close and director Rodrigo Garcia, the prior two being Things You Can Tell Just By Looking At Her and Nine Lives. Close, who also co-wrote the screenplay, originally played the role in a 1982 stage production.

It's undeniably an impressive turn, if not one that truly captures our sympathies.

Ms. McTeer's sly, exuberant performance is a pure delight, and the counterpoint between her physical expressiveness and Ms. Close's tightly coiled reserve is a marvel to behold. The rest of the film is a bit too decorous and tidy to count as a major revelation, but it dispenses satisfying doses of humor, pathos and surprise.

A gripping ensemble piece, good-humoured even at the end of its tether.

This is a gripping ensemble piece, good-humoured even at the end of its tether.

Unfortunately, Albert is so good at being unobtrusive, he nearly disappears from his own story, making it hard for us to get invested in it.

This may be the actress' most finely articulated performance, and it is certainly the most difficult to watch.

A damp little trifle, a sketchbook of gestures, a parade of period costumes and domestic details.

Much like a woman in man’s clothing: a diverting spectacle that fails to entirely convince.

Say this for Albert Nobbs: It's not some run-of-the-mill "life lived in service" drama.